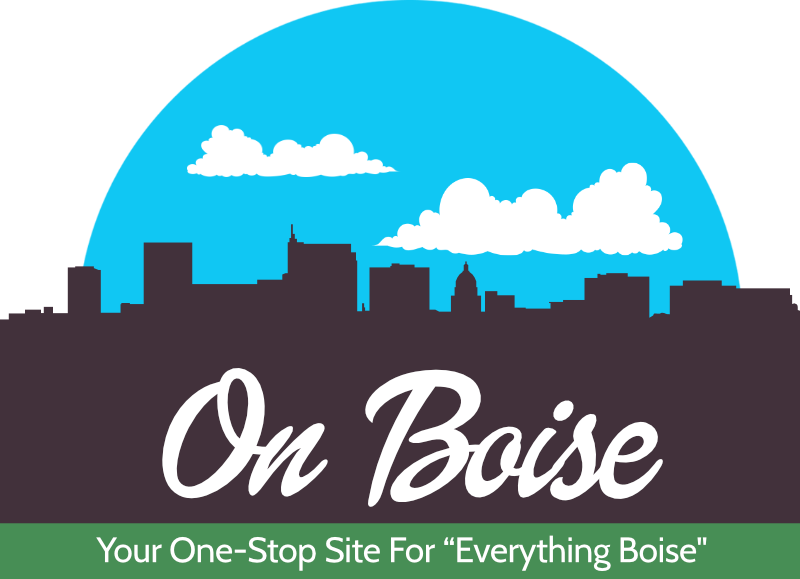 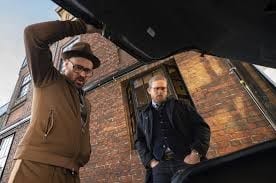 The second category is the artisans. These are filmmakers that usually don’t have a directorial signature. They get in there, do the job, and allow either the actors or the story to take the limelight. Bear in mind that while artisans can sometimes be little more than studio hacks, they can also be unappreciated masters. Stuart Baird is one of the greatest editors in the history of film. He’s also directed Executive Decision and U.S. Marshals, both of which are perfectly entertaining movies.

Here’s where it can get weird. Occasionally there’s crossover, and I submit to you that Guy Ritchie is one of the ideal examples of this. Ritchie had his mind blown after seeing Butch Cassidy and the Sundance Kid. He dropped out of school, blew off film school, and made a name for himself as a maker of hyperviolent gangster comedies featuring hyperverbal characters. Give Snatch or Lock, Stock and Two Smoking Barrels a watch and you’ll realize nobody else could have made those films that way. 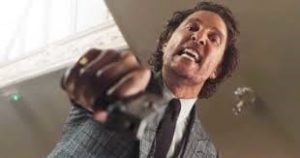 For a few years, those kinds of films were mostly Ritchie’s bread and butter. Then, he stepped over to the artisan side with directing gigs on films such as Sherlock Holmes, The Man from U.N.C.L.E., and Aladdin. Some of them were good fun, while others felt like the work of a hired gun. Nobody ever said making a multimillion-dollar film for a major studio would be easy. Perhaps that’s why Ritchie stepped away from Hollywood and returned to the mean streets of London with his new film The Gentlemen.

Raymond (Charlie Hunnam) is a man of refined tastes and a retiring manner. He probably doesn’t scream at customer service personnel and likely thanks people who hold the door open for him. He’s calm, cool, and collected, and I suppose you’d have to be if you were the number two man to Mickey Pearson (Matthew McConaughey).

Mickey is a self-made man, though unconventionally self-made. A poor childhood in America and a Rhodes scholarship brought him to England. A burning desire for success led him to become a marijuana dealer. Mickey is good at what he does, and his empire that’s worth $400 million bears that out. If he’s had to get a little rough sometimes? Hey, that’s how the game is played. His wife Roz (Michelle Dockery) is cool with it, and she can dish out the punishment herself if needed.

Now, Mickey yearns for respectability, and a monster deal to sell his business to American billionaire Matthew (Jeremy Strong) seems to be the key to making that happen. The only problem is Triad underboss Dry Eye (Henry Golding), who’s decided to muscle in for a cut. Sorry, I meant problems, as the death of a young Russian man by falling from a very high place doesn’t help things, nor does the heroin addiction of a young royal. 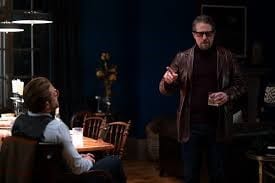 Raymond’s job? Well, he has to deal with all of that on his boss’s behalf, as well as reckon with the unwelcome attentions of Fletcher (Hugh Grant), a slimy private detective running a…let’s say, ambitious blackmail scheme. Fletcher has taken it upon himself to incorporate all of the above events into a screenplay, so on top of everything else, Raymond also has to handle things becoming uncomfortably meta. I hope the guy gets paid well, at least.

If you’ve ever seen any of Guy Ritchie’s early work, then know that The Gentlemen is exactly like that. If you haven’t, strap in for frenetic pacing, serpentine plotting, and a network of criminals who quip as though their lives depend on it. Ritchie has made a perpetual motion machine built to entertain, and it’s not unlike hearing a fabulous (and long-winded) joke while having a few drinks. You won’t remember all the details later, but you will remember you had a hell of a good time.

While the screen story was written by Ritchie, Ivan Atkinson, and Marn Davies, Ritchie wrote the screenplay itself solo. Much like many of Ritchie’s earlier films, his screenplay for The Gentlemen is ridiculously complex. It’s not really about anything, and most of the characters kind of have the same voice, but the same criticism could be thrown at Quentin Tarantino. I’m fine with all of that, and I’m fine with his rapid-fire wordplay and multiple plots that intersect like something out of an M.C. Escher nightmare. I was not fine with the recurring racism or the threat of sexual assault toward the only major female character. I get that scumbags are gonna scumbag, but it’s not a great look, considering that so much of Ritchie’s script is smart and witty. 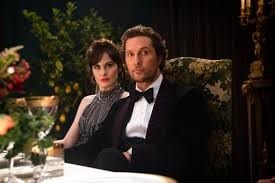 The smart and witty scripts Ritchie writes are likely the main reason he’s able to consistently attract top-shelf actors. You can’t blame them since everyone has a moment to be either a) cool, b) scary, c) funny, or d) all of the above. Matthew McConaughey does good work as the lordly Mickey, but his inclination for delivering laid-back performances means he’s often pushed into the frantic background. While everyone is good, two actors handily upstage him. The first is Colin Farrel as Coach. He’s an affable Irish boxing coach who tells everyone who listens that he’s not a gangster while constantly engaging in very gangsterish behavior. The second is Hugh Grant as the dirtbag who walks like a man Fletcher. It’s amazing to me that the guy who made a name for himself in lightweight romantic comedies has become one of the most unpredictable and entertaining character actors working today. As Fletcher, Grant is essentially delivering an unbelievably long monologue, and he does so with fearlessness, wit, and buckets of sleaze. If there’s one reason to see this film, it’s Grant’s “can you believe I’m getting away with this?” performance.

Thomas Wolfe wrote that you can’t go home again. With The Gentlemen, Guy Ritchie proved him wrong. Sure, he’s not exactly breaking new ground here or doing anything particularly profound. I’m okay with that, as Ritchie slips effortlessly back into his groove and delivers a solid and much-appreciated piece of entertainment.

*For example, the elderly couple a few seats down from me had apparently never seen a Guy Ritchie film before. The violence and rampant profanity caused them to leave, muttering darkly, after 45 minutes.

Tim Brennan
Tim has been alarmingly enthusiastic about movies ever since childhood. He grew up in Boulder and, foolishly, left Colorado to study Communications in Washington State. Making matters worse, he moved to Connecticut after meeting his too-good-for-him wife. Drawn by the Rockies and a mild climate, he triumphantly returned and settled down back in Boulder County. He's written numerous screenplays, loves hiking, and embarrassed himself in front of Samuel L. Jackson. True story.
Tagged: Movie ReviewThe Gentleman
OnBoise.com is a directory and information guide for Boise, Idaho.
Discover the best of Boise shopping, restaurants, night life, breweries, events, business, outdoors, fun, local life, real estate, transportation, jobs, and schools.
Looking for what to do in Boise? OnBoise.com has columnists, and bloggers to keep you up to date on the best of Boise, Idaho.